Atricle by Neeraja Murthy for TheHindu.com

Strange worlds with ancient powers exist in Nishi Singh’s debut book The Pearl of Immortality. Known by her pen name Nishi Chandermun, the law graduate-turned writer sets a narrative involving magic and adventure and transporting readers into realms of fantasy. The book follows the story of Xerxes, a 15-year old boy from 18th century Persia, who gets magically teleported to the fictional planet Ishtar in the Alpha Centauri star system. “In a world so different from Earth, a world dominated by the light and dark forces of magic, Xerxes learns of his new identity as a Dragon Rider and gets catapulted into a succession of perilous magical ventures,” says Nishi, adding the book is the first of her ambitious seven-part The Sands of Time series.

While the works of Enid Blyton shaped her world as a child, the Hardy Boys series evoked a passion for adventure. “It greatly plays out in my work,” she says, adding, “I quite favour the current Sword of Shannara series by Terry Brooks, which also blends adventure into fantasy, very much like my own work.”

Born and raised in Durban in South Africa, Nishi informs her paternal grandfather Mahadeo who hailed from Muhammadabad, Ghazipur in Uttar Pradesh and his wife Gendia had come to Natal in South Africa in 1892, to work as indentured Indian labourers for a period of five years. She hopes to visit India sometime. “A trip to this wonderful land is definitely on my agenda. I consider it important for one to connect to one’s beginnings and I really look forward to connecting to the homeland of my great ancestors.” Over email, she shares the inspiration and challenges in writing The Pearl of Immortality.

What inspired you to write a fantasy novel?

In seeking untapped waters as far as fantasy world-building is concerned, I chanced upon the mythology of Mesopotamia. Further research indicated that the deities of this era were in possession of super-extraordinary powers of magic, a fact that awed and lured me into this intriguing world. Merging traces of Hindu and other legends as well, I used my creative expertise and fashioned a home for The Sands of Time series.

Tell us about the research that went into it?

The Mesopotamian mythology is an uncharted territory as far as world-building is concerned. Several years of arduous research have been expended for the purpose of my fantasy series. I equipped myself by immersing into literature, art, religious texts and myths of the time. I have also studied various academic texts on the language of this era, and inspired by such translations, have created a magical language for the Sands of Time series which I call the Supreme Words.

How did you develop ideas about characters, storyline and setting?

My fantasy creations are super-beings of tremendous magical potential called the Elder Gods and the Aryans. The antagonist race are the Nagas, serpent-beings of equally great magical powers. I have created a range of magical creatures, all of which are wholly unique, born purely out of the figment of my imagination. My subconscious mind is the sole supplier of all my ideas for characters, storyline and characters.

What was the biggest challenge in writing the book?

Being the first book of the series, there was enormous pressure to guarantee that I had effectively built a world to permit the remainder of the books to comfortably emerge. It was a task that demanded great dexterity, an undertaking that also required me to have sufficient foresight into the remainder of the books in my series and to ensure that there would be a logical flow from book one to seven. I am totally satisfied that I have adeptly engineered this project.

Whilst book one (The Pearl of Immortality) focuses on regaining and restoring a rare and magical artefact — the Pearl of Immortality — to a mythical dragon, the overall quest of the series is to seek the Seven Sands of Time. The Sands are part of a magical structure that permits the free flow of Time on Ishtar and which were lost thousands of years ago, bringing the planet close to annihilation. It was necessary for me to divide the series into seven books, concentrating on one particular Sand per book.

Having studied psychology and law why did you still choose to make writing your career?

I have written for as long as I can recall. From bits of fiction to poetry, pen and paper have always been my preferred tools. However, having a very strong academic mind as well, I embarked to university where I studied law and psychology under the notion that writing was a distant fancy. Nevertheless, the writer in me would not relent. Not finding solace within myself after many years, I knew it was time to surrender to the greatest passion within me. It was time to put pen to paper.

Published by Author’s Channel, ‘The Pearl of Immortality’ (2019, ₹299) is available at all book stores and online 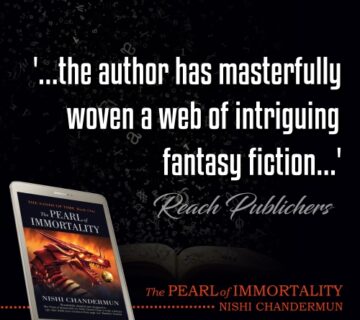 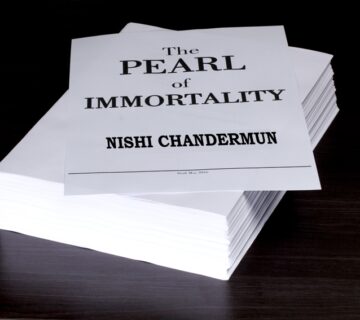 My Fantasy Novel – The Pearl of Immortality